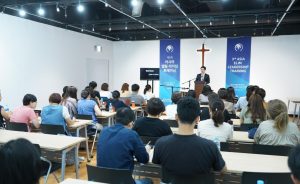 On August 19th, the 3rd Asia Elim Leadership Training commenced with an opening service at Asia Pacific Elim center at 2 pm. The leadership training was joined by Elim ministers from the Asia Pacific countries such as Japan, Hong Kong, Macao, Indonesia, Mongolia, East Asia, and Australia. It started with the powerful presence of the Holy Spirit. The leadership training will continue for the next three days and it will be composed of presentation of reports by each country, intercessory prayer, lecture on physical healing, prayer for the revival of Asia, prayer for the Gideon campaign, and healing prayer meeting.

At the opening service,  Pastor Victor Ahn,the general secretary of the OAAP, delivered a message titled, “Jesus Christ will heal you” (Acts 5:15). In the message, he gave thanks to God for an increasing number of participating countries and regions every year. He then mentioned, ” God must see this gathering very preciously and wants to bless. I wish that God’s grace and the fullness of the presence of the Holy Spirit be upon the entire gathering.”

Pastor Ahn continued, “To humans belong the plans of the heart, but from the Lord comes the proper answer of the tongue.” This is the reason that we cannot help but rely on the power of God and the leading of the Holy Spirit. In this regard, Elim ministry is very significant for, it seeks the power from the Holy Spirit. He continued, “Through this gathering, I hope that Elim ministers from each country, first receive abundant grace of God and experience the power of prayer. Also, I wish to see the advancement of faith being made in various ministries when they go back to their own countries.”

Pastor Ahn then gave an example of Peter in Acts healing the crippled man. Peter, who was filled with the power of the HS, boldly testified the gospel and healed many souls. In our ministry, we will also encounter weary souls, who are suffering from spiritual and physical pain. Then just as Peter proclaimed “Jesus will heal you,” we too should lead them to the Lord. In addition, when we experience great power and the sign, instead of going astray, but rather we need to remember that we are just mere intercessors and channels of God’s great power.

Following the opening service of the first day of the Elim leadership training, each country gave a ministry report and a lecture on the intercessory prayer was delivered. Later in the evening, a prayer meeting was held for the Gideon project and the revival of Asia.