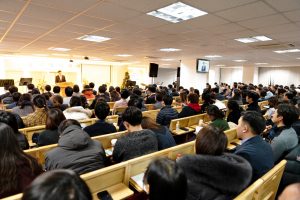 Pastor Mark Shin, the president of OA Korea, prays for the New Year of Hope, at the first hour, and prays for the year to reveal God’s glory, to save souls, to be blessed, and to be the light of the world.

“It was so easy to preach the Gospel, because all the roads were laid in Rome at that time. The time came when the Greeks were well spoken, and when the borders were ready, the Lord Jesus came. And Paul was evangelized. Paul was an apostle appointed in the very historic moment. ”

“We are also in this extraordinary grace of God. The best value is in the calling of God. God compulsively sets up the ones he wants to build. We are weak and lacking, but God has led us to this place by the omnipotent grace. God has opened the door to us.”

“The Apostle was called to open a new world and awaken many, at a special time. We also know that this Bible is a living word. We are also able to do it.”

With the closing praise, the saints praised their determination to stand by faith. After the service, each person drew the Bible scriptures of the year.